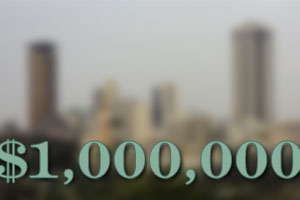 Nairobi, Kenya, is a huge city in East Africa. The distance between the rich and the poor is huge. As a result, crime is more common than in most parts of North America and Europe. There are more razor wire fences, alarm systems, security guards and carjackings.

I know it’s nice to focus on the positive aspects of other cultures, but that’s not my mission today. Instead, I want to tell you what it’s like to be rich.

Generally, it’s not fun. Simply eating at a restaurant caused a lot of guilt. We knew the price of one not-even-fancy meal could have fed a hungry family for days. Was the brief pleasure of eating out worth it? We thought so, as dining out was one of our ways to survive.

And we gave. We invested in people who were naturally part of our lives. We quickly learned that just giving money was not the answer.

Providing training allowed a young man to have a better-paying job that made a difference that lasted a lifetime. But it was a lot of blood, sweat and tears to make that path actually work, on his part and ours.

Paying for dental work for a lady we knew allowed her to eat with no pain, for years afterward.

So how do you deal with the guilt in your life? I would encourage you to not sit on it or suppress it. Do something.

Epilogue: We have been back in the land of Target and Prada for more than seven years. We are not directly involved in the lives of those we helped back then. And the guilt of having so much relative wealth decreases as time washes our memories away. But we’re still trying to make a difference in situations that are in front of us now. We fail a lot – and still eat at restaurants. But we are doing something.

2 Replies to “What would you do with a million dollars?”