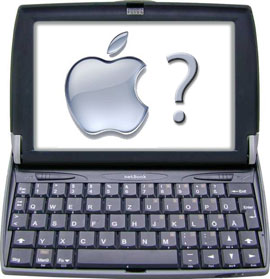 I don’t have a netbook. I haven’t even used one. But I do know that Apple should make one.

Netbooks are small, light, long-running-on-a-charge laptops. Perhaps the biggest advantage is the price: about $300 for an Acer. In Atlanta, if you sign up for AT&T internet, they’ll give you one for $50.

Often they run Windows XP or Linux, to keep the price down. (You can guess that Microsoft hates them, since they get about $50 less for bundled XP than for bundled Vista.) The processors and hard drives are of course weaker and smaller than those of their larger counterparts. But they are meant for doing word processing and email. (If you want to do video editing, go to a desktop.)

So if Apple would make one and keep the price below $500, I predict they would sell a ton. The Air is just too expensive for most people and big compared to netbooks. Most MacBook Pro owners would love to have a smaller, lighter computer for short business trips – when their iPhone alone won’t cut it.

You can bet that it would be much more elegant than what I mocked up here!

Finally, the luxury pick of netbooks would be one made by Sony. They have been creating netbooks longer than the rest. And their quality is normally quite good.

Update: Jeremy Tanner runs Mac on a Dell Inspiron Mini 9. The base price is around $279. The software is extra, and your warranty will probably be voided. But that sounds like a great way to go!

Update 2: TUAW has a long post on why the “hackintosh” may not be the way to go, if you were considering that.