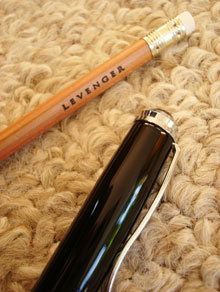 I just met Phil. He gave me a pen. (How cool is that?) He told me about the Levenger Store at Macy’s – a few blocks from the conference I attended over the weekend. Normally Levenger will assemble a small notebook for you to try out their pens on. Sadly, they were out of the paper, so I couldn’t get one. I did test drive a few of their pens. Nice. My budget wouldn’t quite stretch for the one I liked, but I did buy some pencils! My buddy Jon is analogue enough that he likes pencils, so I shared my pack with him.

One of the reasons I enjoy the social media community is that they’re very open-handed and friendly, as evidenced by Phil and Jon. Even though Chris has more than 66,000 followers on Twitter, he greeted me like a long-lost friend. (That was our first time to meet in person, though we have known each other through blogging for almost four years.) Jon, Becky, Sheila, NEENZ and I were good buddies by the end of the conference.

The social media community is a huge contrast to the graphic design community. When I finished college, I started work in Dallas. I went to several professional designers’ meetings. They seemed to be centered around achievement and ego. I never fit in. But the social media community celebrates those with disabilities that some may look down on. How refreshing!

And the pencils and pen are nice.

Takeaway: what are some ways you can be open-handed today?

4 Replies to “Of pens, pencils and social media”