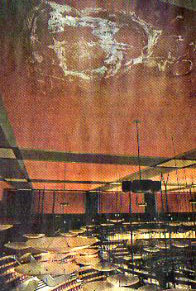 Sunday’s Denver newspaper had an article about how Denver’s Boettcher Concert Hall is in need of repair. The photo at left (courtesy of The Denver Post, taken by Joe Amon) shows water stains on the ceiling. (It’s not a shot of the shroud of Turin.)

The article describes how the plan was to spend $100 million on a new symphony hall. The recession stepped in and caused the current plan, which is to use $1.5 million to make “stopgap fixes”. But officials still would like to spend $50 million to “renovate and expand” the existing facility.

Reality? Open your eyes, officials. Taxpayers do not want to spend another $48.5 million to have an amazing new symphony hall. The vast majority would be happy to have an improved hall – without going fully in the direction of buying a new top-of-the-line Rolls Royce.

I have seen a few concerts at Boettcher. It’s fine. I felt like I was going back in time to the early 70s, but what’s wrong with that? The acoustics are not quite up to the standards of the Morton H. Meyerson Symphony Center in Dallas, but I could hear alright, even in our cheap seats.

Solution? Go for a more modest plan – spending maybe $4 million. Fix up the old hall without giving her a complete revamp. She’ll serve us fine. And I would propose that solution will work for any number of other plans civic officials come up with, worldwide. Using the car analogy – if you have a 2001 Toyota Corolla (which we do) and it’s showing its age, you might consider getting a 2008 Honda Accord, rather than a 2010 BMW 550i. (Thankfully, our Corolla is not showing its age – so we will be able to keep it for a while longer!)

6 Replies to “Base decisions in reality”