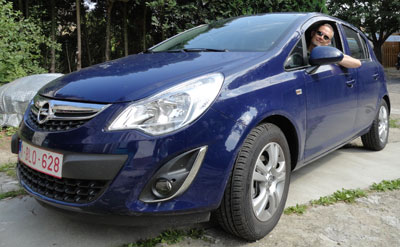 The Opel Corsa is the European version of the USA’s Chevrolet Sonic.

The Corsa (shown) is a great little car. Our family of five did a day trip of 160 kilometers (100 miles) across Belgium and Holland without any problem, in spite of the relatively small size. The feeling of quality was evident in all the controls, how solidly the doors shut and in my general perception of the components being substantial.

The Corsa/Sonic handles well. It was quite comparable to the Ford Fiesta I drove a few days before driving the Corsa.

Sadly, the Sonic has an ugly front end, but it’s still a good car – far better than the Aveo, which it replaces in the Chevrolet line-up. The Aveo was based on a relatively cheap quality Suzuki.

A huge difference between the car you can buy in Europe and the USA model is more than cosmetic – the European models can be bought with diesel engines. In the 1.3 liter model we rented, I recorded about 43 miles per gallon. According to Opel’s website,* the gas (petrol) model gets about 23% less fuel economy. (And the Sonic will get even less fuel economy than the European gas model.)

I found the power from the small turbodiesel to be more than adequate. We’re not talking sports car territory, but it had more power than our Toyota Corolla, which has an engine that is almost 1.5 times bigger than the Corsa’s.

I’m just sad that American cars don’t get such great small engines – when they are already being made and sold in the rest of the world.

And finally, here is a great article on why America just doesn’t get diesel cars, from Automobile Magazine. (It’s a PDF. And copyright pardons, please. And forgive the poor quality of the scan; I spilled water on the page.)

* Note that this link is to the Vauxhall Corsa, England’s version of the Opel Corsa.