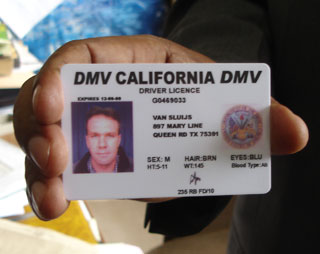 I am still taking a break from blogging until 2012, but here’s another post you may have missed. This originally appeared in my first blog on July 20, 2006. Context: I was living in Nairobi, Kenya, Africa. The rules of life are a little different there.

A few weeks ago, a colleague asked me if I would stand in a police line-up. This friend had his identity stolen here in Kenya. A South African white guy stole his credit card info (along with others’) and had made tens of thousands of dollars of purchases.

The police officer said he didn’t know enough white guys to fill a line-up for witnesses to look at. So he asked my colleague if he could find some white men. (Thus, me, along with about eight other colleagues.) My first reaction was, “What if the witnesses think I look more like the criminal than the criminal does? I don’t want to go to prison!” Then he assured me the officer said there was no chance any of us non-criminals would be convicted. Mostly I said yes because my other colleagues did. I figured if they thought it was safe, it probably was safe.

In the end, we didn’t stand in a line, as the criminal chose the option of not standing in a police lineup.

While we were waiting for things to get sorted out, the police officer basically said, “We trust you (white) people.” (And then he implied something like, “This guy really ruined our perceptions!”)

The photo? The police officer gladly gave me the opportunity to take that shot. (You should always carry your camera!) Of note: he had a South African “Temporary Passport” (whatever that is!) and a fake California driver’s license (with the address on the card being, “Queen Rd TX” (Yes, that’s supposed to be “Texas”.) On the back of the “license” it said “Property of the US Government”.

The whole incident really gave me a good feeling about the Kenyan police. They did a great job apprehending the criminal. Admittedly, he did some pretty stupid things, like trying to steal from the same shop three times. (The third strike was his out.)

And another thing he didn’t do was consider the consequences of his actions. In the Nairobi newspaper on the same day as our line-up experience was this story, “Conditions in [Kenyan] Prisons Worst in the World, says Official.”

3 Replies to “Ever stood next to a known criminal?”