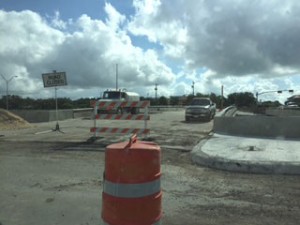 This is a guest post by my brother, Bill Merrill. Thanks Bill!

For most of my life, when I wanted to say how slow something was, I’d use one of the standard phrase “slower than molasses in January.” In recent years, I’ve switched over to “slower than highway construction.” According to our friend the internet, the US federal government currently spends about $40 billion on our roadways each year, an amount that has steadily increased throughout the years, even in current-year dollars. In my own experience, it hardly seems I can drive anywhere in any big city without encountering one construction project or other. (By the way, this was NOT the case in my vacation a couple of months ago in the Benelux countries of Europe.)

It’s not just that progress is so soooo slow on these projects – the average length of a project here seems to be about seven years – but also that there are many times when I drive by the construction site and nothing is happening at all. There is a turn-around on a freeway overpass near my credit union branch that’s been underway for about a year now, and I wonder why it’s not finished yet. Most times lately when I pass the turn-around, construction equipment sits idle, no sign of life anywhere. This can be frustrating, but I try to be mature about things like this, and not let my frustration turn into unproductive, useless anger.

I’m not in the highway construction business, but I had enough indirect contact with it earlier in my professional life that I suspect this kind of situation is a result of scheduling issues, or maybe budgetary considerations. The particular turn-around in question is part of a much larger highway project, so maybe the turn-around is on hold until some connecting piece of the project is finished. And it is certainly not the workers’ fault, so it would be totally unfair to be hostile toward them in any way.

(By the way, turn-arounds are really wonderful things, allowing vehicles going from an access road to its opposite-direction counterpart to avoid waiting through traffic lights! They don’t exist everywhere, but they should!)

Editor’s notes: 1) Colorado does not have those turn-arounds, and we wish they did! 2) Bill took the photo at the road construction site mentioned in this post.

3 Replies to “Slower than Anything”