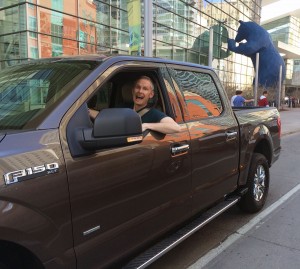 As I was driving a big pickup, I reflected on freedom. In America, we have the freedom to buy as large a vehicle as our budgets (or willingness to take on credit) will allow.

Very few people in Europe drive large vehicles, due to fuel costs, the narrowness of roads and the difficulty of parking something so long. But it goes deeper than that. Many Europeans would consider owning such a vehicle wasteful.

Fuel costs are high in Europe because governments (elected by people, in most cases) have added substantial taxes to push people to smaller vehicles. It works.

Wired recently had an article about the least free country on this planet, North Korea. Citizens there have no choice about which car to drive – nor do they have enough funds to buy any vehicle. The article explores the ideas of how former North Koreans (now living in South Korea) are smuggling in western TV and movies to create a sense of discontent in viewers’ minds. There’s no real evidence that it’s working, though change could take time. China has had a major shift in the direction of freedom during the last 20 years. Cuba is opening up. Who knows what will happen.

With freedom comes wonderful experiences – and also garbage. The smuggled USB drives have shows that introduces viewers to the best and worst aspects of western culture. The change agents feel like the worst shows might shock viewers into some kind of awakening. As an American, I am ashamed about some of the ideas my country spreads to the rest of the planet. But getting small glimpses of freedom may spark a revolution.

Footnote: Those of you who know me understand I would never buy a big pickup. I test drove one as a part of a promotion at the Denver Auto Show. Interestingly, the new Ford F-150 with the smallest engine will have a greater impact on America’s fuel consumption than all the electric Chevrolet Volts combined, due to sales volume.