A small windfall hit me like welcome summer rain. I decided to celebrate by getting a pair of Apple AirPods Max.

Ebay was the perfect shopping destination. I found a pair in great condition in happy neutral space gray at way less than retail.

Setting them up was super easy. The software interface was very simple to use and had numerous options.

So, goodbye AirPods Max. I sold them yesterday on Facebook Marketplace.

I enjoyed exploring this product that I had always been curious about. I only lost $20 in the exchange.

I left with a nice little reminder that the only satisfaction available will be in heaven.

And then I went back to a modest pair of Sony phones.

My Kindle served up this message last week: “Alexa, what should I read next?”

For some reason, that offended me. Why should I listen to what Alexa tells me about what I should be reading? Won’t I just be playing into the hands of Alexa’s father, Amazon?

But then I stepped back.

Spotify’s algorithms have done a fine job of serving up fresh music to me for a few years now. I’m a devoted fan of their “Discover Weekly” playlist, which provides new music to me based on the tunes I like. They don’t always get on-target… some of the bands and tunes have been a little too weird. And lately, they are serving up too much of the kind of music I enjoy. I like to find music that stretches my boundaries … but not too far.

So let’s ride those algorithms… but let go when it gets too choppy. 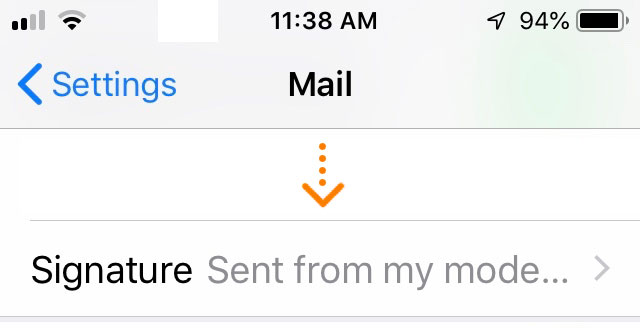 Did you know that you can change the signature at the bottom of emails that you send from your smartphone? It’s easy.

These instructions work for an iPhone, but steps for an Android phone are similar. 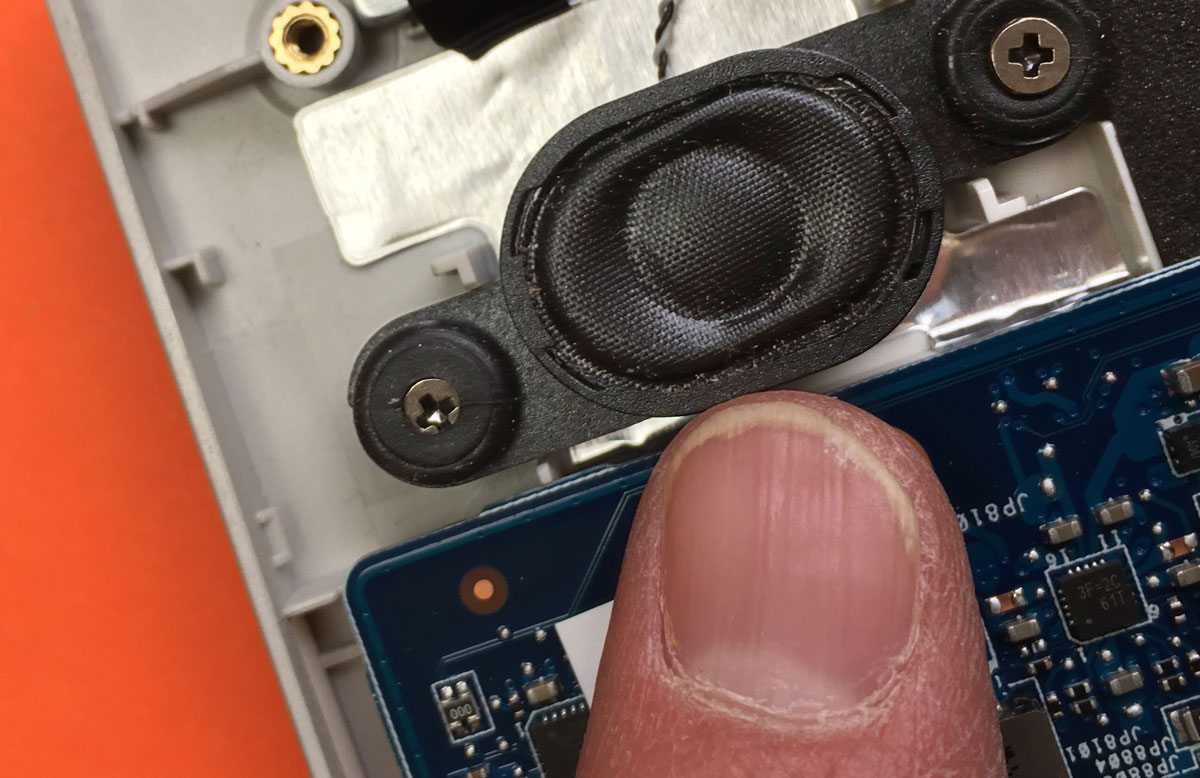 We bought our first Toshiba laptop in 1995. It was a good one. It lasted about 5 years.

This latest Toshiba lasted only about 9 months. Sadly, the warranty lasted 6 months.

In between that first Toshiba and our final Toshiba, we have bought several other brands of Windows laptops. I can’t even remember those brands – Acer or Asus was one.

But in the interim, we have bought a few Apple laptops too. And they have been much more reliable. The laptop I am typing this on was bought in early 2011. It’s still running very strong. (I have replaced the battery and hard drive and added memory.)

We bought Heather a MacBook Pro in 2009, and it’s acting like it never wants to die. Its first battery is even performing well.

No more Windows laptops. I finally learned my lesson.

The photo is a speaker inside that ill-fated Toshiba. My index finger is there to show its size. (I removed the hard drive for security purposes before giving it to Best Buy for recycling and thus saw its innards for the first time. It had stereo speakers.) It is sad to send them off to China’s Great Recycling Machine in the Sky. 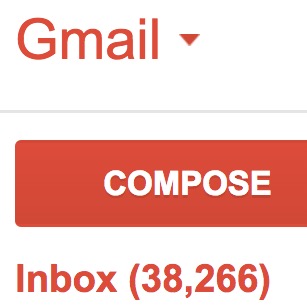 Why do I have so many emails in my personal inbox?

Like most of us, I am a man of contrasts. I don’t believe in eating up too much space on server farms. So I do several things to keep my email account from hitting Google’s free-cloud limit. (Currently, I’m at 33%.) Here are those actions:

This little app has given me more fun than the last three photo apps combined – Prisma. 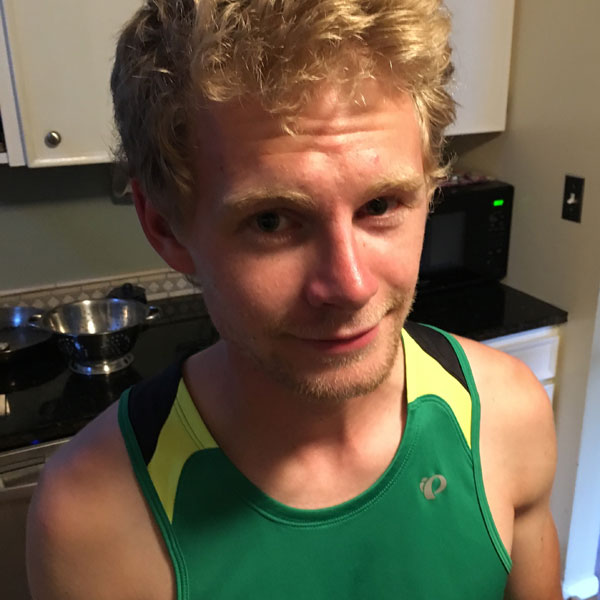 And here are some of the results (tap the right side of the image to get to the next one):

So if I convinced you to try this app, here’s where you can find it: Prisma. Currently, it’s just available for the iPhone, but if you have an Android, you can sign up to get news about the beta version.

Special thanks to my son Jay, the model. 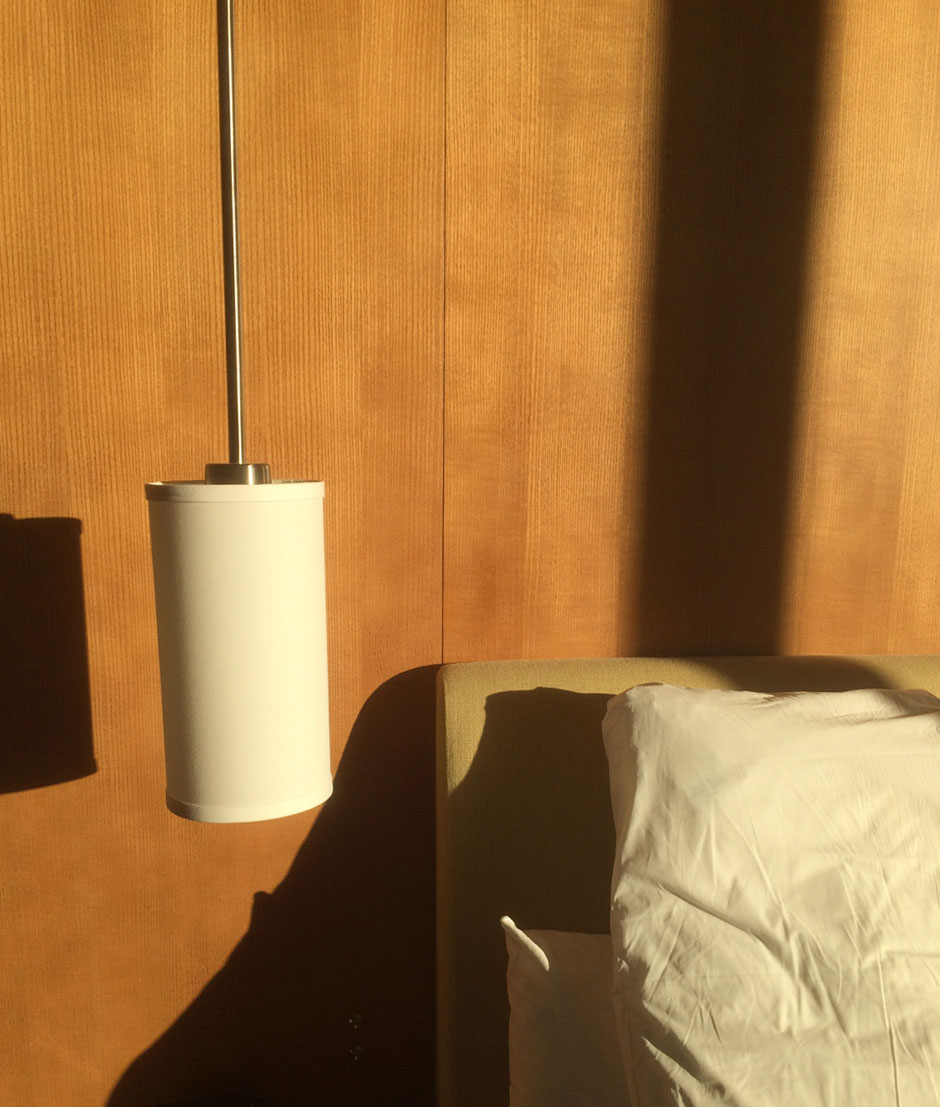 You heard it hear first – my startup idea.

Business people who travel a lot often sleep in a large hotel room with two beds – and one is always empty.

What if they used a service like airbnb to get a roommate for their two-or-three night stays? 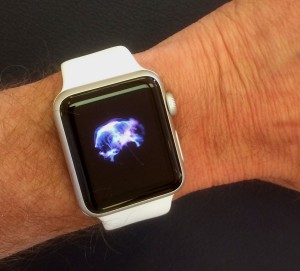 Yes, that’s my wrist that the Watch is sitting on.

So this is not a super-deep review, since I do not own one. But I will give you some first impressions, having spent about 90 minutes in an introductory workshop at my local Apple Store, playing with one and trying several on.

Here are my initial thoughts:

Bottom line: Game-changer… 1) I think there are vast possibilities for how this will transform the way people relate to technology. 2) Today’s Groupon email had fitness wristbands – and a series of Breitling luxury watches – for far less than half price. The luxury watch and fitness band markets are changed forever. 3) Health professionals are just beginning to imagine new worlds that will open up for monitoring and then responding to health spheres.

None is on-order for me …. yet. I’m still trying to figure out how to justify the (not insignificant-to-me) expense.

* Apologies to my friends outside of the USA. You’ll need to go to your nearest Apple Store website to check pricing for your area.

For more info, visit Apple Watch on the web. 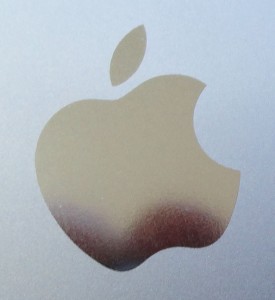 I wonder how many people will walk into an Apple Store after April 24th and then find out that they need an iPhone for their desired new timepiece to function.

Yes, Apple will be selling a fair number of iPhones to Android people who must have the latest toy.

This is very clever on their part. Apple’s share of the smartphone market has been slipping a little over the last few years. This strategy will maybe change that trend.

I have to admit that if it weren’t for a number of un-planned-for recent necessary expenditures, I would be very tempted to buy the base model, even though I don’t wear watches. (If I could afford it, I would start wearing an Apple Watch.) 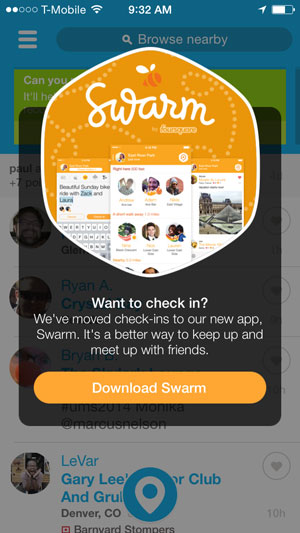 Foursquare was fun, while it lasted. I checked in at interesting places I visited and shared those with some of my social media friends. I enjoyed seeing where they checked in too. It was great to not use Facebook for that, as I never want to overwhelm any social media channel with too much stuff about me.

Then Foursquare switched things up. Now it’s just a platform for advertising. (Google Maps already allows me to look for businesses quite well, thank you.) Foursquare forced anyone who wanted to keep checking in to download a new app called Swarm. Not me.