Netflix is killing off cable and satellite TV, almost single-handed. It’s cheaper. There are more options on what to watch. You don’t have to watch ads.

And now you can stream movies and TV shows to your iPad, iPhone or iPod Touch. (The streaming to your computer option has been able for a while.) So they released a plan that is solely streaming with no DVDs by mail – for a mere $8 a month. Eventually, if Hollywood loosens its grip a little, I’m guessing all movies and TV shows will be streaming. Currently only about 10-20% of Netflix’s library can be streamed.

So of course they’d up their prices. The $17 plan is now $20. Other plans went up too. If you have a monopoly, why not raise your prices? (Yes, technically, there are other competitors, but Netflix is the 1,000 pound gorilla in that marketplace.)

Note for my overseas readers: Netflix is not yet available in other countries except Canada, but I think it’s a matter of time, if the country’s infrastructure can support it. I’m not expecting it in Afghanistan anytime soon. 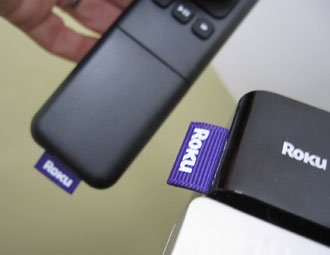 So we bought this Roku box recently. With the cheapest Netflix subscription (USA), it allows us to stream videos to our TV. We don’t have cable, so this is a great alternative.

Anyhow, you’ll notice the fabric “tag” on both the remote and the box itself. Roku stole the idea from Levi’s. (I don’t have a problem with that – Roku is not a competitor for Levi’s in any way!) But what a creative combination – fabric with hard shiny plastic!

Takeaway: What are some ways you can bring the unexpected into your work today?

Get an email every time there’s a new post