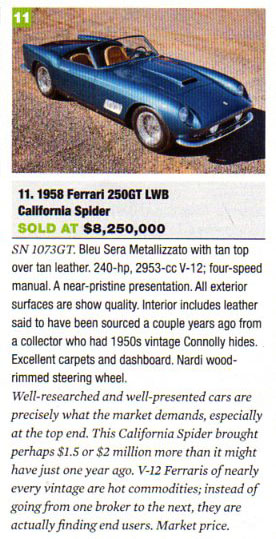 This Ferrari sold for more than $8 million. Yes, million. And it’s probably older than you are.

I tried to think through what would motivate someone to spend that much money on such an old car.

1. It’s art. Yes, it is a beautiful car. And it’s almost as rare as a Picasso painting.

2. The collector is hoping the value will increase. That is a bet; markets could crash and what a singer named Larry Norman sang a long time ago, “A piece of bread could buy a bag of gold,” might come true.

3. The collector has enough money that they are not worried about what brand of laundry detergent to buy.

4. The collector has never been to a slum in Africa or Asia.

5. The collector has enough money to pay insurance for his or her occasional drives. (One year’s insurance must be more than the cost of my house.)

Do you have any ideas on what they were thinking?

Special thanks to Automobile Magazine, where this was featured.

4 Replies to “Why would they buy it?”