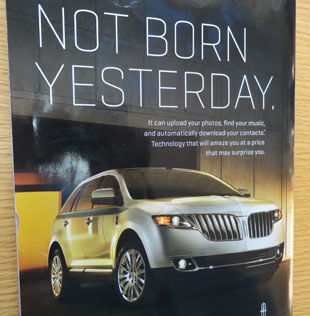 Lincoln is moving forward with their technology. The on-board MyLincoln Touch system has all kinds of things that your internet-connected home computer offers: the ability to upload photos, find music, and sync your contacts.

The problem is that many of those things should only be done when you are parked. And they would all be done much easier on an iPad. The $400 cost is not much less than an iPad, and you can use an iPad in far more places than your Touch system.

Park your car, queue up the songs you want, plug your iPad or iPod into your car stereo – and then drive. You don’t need photos or contacts in your car’s computer anyhow.

If you’re in the market for a new Lincoln MKX, maybe consider a used Acura MDX or Honda Pilot for a third of the price and an iPad for each member of your family (or for several of your friends).

This ad appeared on the back cover of the September 2011 Automobile magazine. 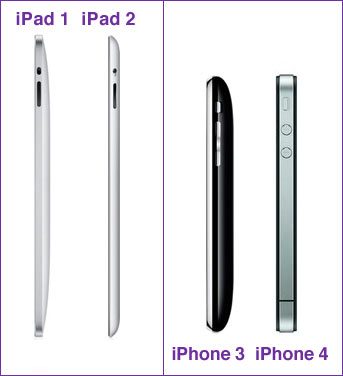 I’ve always thought it was strange that Apple went in opposite directions for their iPad and iPhone lines.

Version 1 of the iPad has rectangular edges. Version 2 has a clamshell design.

The iPhone? Version 3 has a clamshell design. Version 4 has rectangular edges.

Apple is going divergent directions with these two product lines. 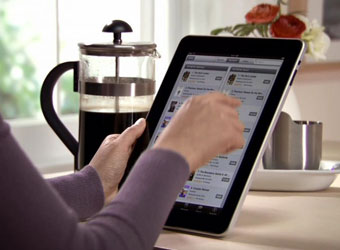 One evening, I watched all of Apple’s iPad videos. But then, I’m a fanboy, so it was fun.

I noticed a few things – none of the models were older than about 32. I remember seeing a kid in only one. The rooms that each video was shot in were perfect. The models represented a little politically-correct ethnic diversity. (I think the mix was fairly close to what their real life buyers might be – maybe the videos were a little heavy on the African-American side.)

None of this was surprising to me.

Apple is selling a lifestyle. “If you buy an iPad, you will look like this.”

Don’t buy that. (But if you can afford it and can actually use one, do buy an iPad. Or at least buy and use a coffee press.)

And finally, since today is earth day, I would ask you to consider not buying that next “thing” on your list, whether it’s an iPad or a coffee press. Instead, use the thing you already have and make it work. That choice will be very green, if you care about such matters. 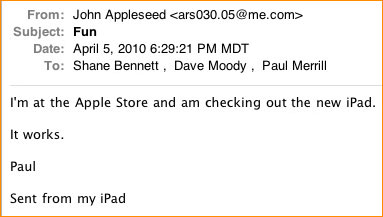 I visited the nearest Apple Store just before Saturday’s launch of the iPad.

I should clarify – I went to see how long the line was, a half an hour before the opening, so I could take this photo for you. Then I left.

What for? Somehow being that close to the launch was enough for me.

I can’t explain why.

(By the way, the security guard said some people had been waiting in line since around midnight, the night before.)

I think it will sell a massive amount. Basically, it’s a Kindle, an iPod Touch, and a keyboard-less* MacBook, all rolled into one. It has a much prettier interface than the Kindle. You can do anything that requires the internet when you have a wifi connection – or if you don’t (and spend more), you can do it cellular-ly via AT&T (in some parts of the USA). It sounds like there will be a reasonable deal on that too – $30 for one month’s unlimited data service.

Some of the apps look to be pushed even further than their Mac or iPhone equivalents. And they are reasonably priced ($30 instead of $79 for the full iWork suite).

Prices range from $499 to $829, depending on storage capacity (16-64 gb) and whether you add the 3G internet connection capability. Sounds like a deal to me – for what you get! Availability? “Sign up here, and we’ll contact you when iPad is available to order.” (Could be two weeks. But I’d guess a month-and-a-half.)

For me? I won’t be getting one anytime soon, because I can’t afford it – and because I’m too shy to be that cutting-edge. But if someone gave me one? I’d suck up my pride and settle for being that cutting edge.

(Photo from the Apple site.) *You will be able to get an external keyboard – but it will probably cost something outrageous like $79.