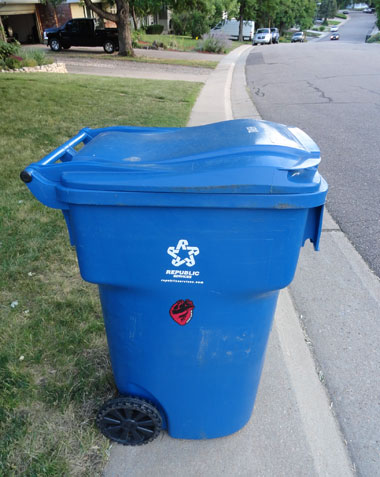 There are too many trash companies in Denver. In the old days, the city would have picked up our trash. These days, there are about ten companies to choose from. The upside is that it keeps the cost down for those who have to pay for the service, such as myself. But there are many downsides:

– There is way more pollution. Each of the ten trash companies that makes a pass through my neighborhood has ten trucks that drive by each week. There used to be one.

– There are five days of noise, rather than one.

– There are cans at the curb five days a week, rather than one.

We changed trash services recently over two issues, even though we had used the same company for at least five years:

1. We care for humans. Our old company did not have trucks that could empty the cans; the guys had to lift them up to empty them. I always felt bad for their backs. So now, at least there is one less set of cans for them to empty.

2. Price. Yes, we are paying less now – due to competition.

Finally, please understand that I am not saying competition is bad in every case. It’s just bad in this case and situations similar to this.

5 Replies to “Sadness about competition”