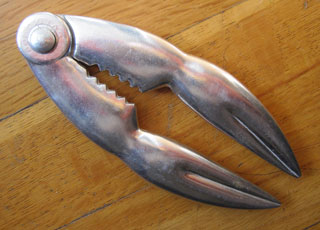 Black Friday fuels the American system. That’s not a bad thing, necessarily – but it can be bad. When the price drops so low on an item that we must get it – even though we have one already that maybe isn’t quite as good – that’s not good.

Lest you think I am preaching from a lofty tower, my family and I visited at least two large stores to take advantage of some of the sales. So I’m preaching to myself on this, too.

So, you ask, what does this have to do with aluminum lobster pinchers? On Thanksgiving, when we were attempting to find an obscure serving utensil in one of our drawers, we uncovered this. It was a free promotion from Lexus, back when the economy was humming enough that manufacturers gave away such things. They were selling a lifestyle. One that is not who I am. So last Thursday, it was entered into our to-the-Goodwill (charity shop) bin.

Be true to who you want to be.

For those not in America, “Black Friday” is the day after Thanksgiving – when retail outlets have crazy sales with amazing prices – often starting at midnight on Thursday night – which isn’t the nicest thing for those working at the stores. It’s called “Black” Friday because it’s the day stores hope to sell so much that it moves their financial bottom line out of the red (unprofitable) and into the black (profitable).